All roads lead home was definitely the case for Fallbrook native Christine Parker, who left her job as a therapist in the Midwest to return to San Diego in pursuit of a music career. Parker, whose eclectic vocational journey included time spent as a wilderness guide, Starbucks barista, log cabin builder, and theological seminary student, will celebrate the release of her first full length solo album, “Looking Glass,” arranged and produced by Marti Amado, with a party and concert on October 12 at Lestat’s West Music Venue in Normal Heights. The event will start at 9 p.m., and will be led off by singer-songwriter Chad Taggart as an opening act for Parker. 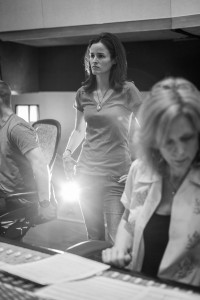 “Looking Glass” began in a very grass roots way. “At the encouragement of friends and family, I tried recording some of my own songs with Pro Tools on a laptop just to see if I could do it, and to see if they sounded good,” says Parker. Determined to master Pro Tools in spite of what she calls “chronic technical ineptness,” she took a month off from her work as a therapist in Missouri to take a series of audio recording classes at TRAC/Studio West. Parker met Amado while at Studio West, and hired the veteran producer to help evaluate her home recordings and to create instrumental arrangements and production around the vocal and guitar basics. “Christine’s really remarkable,” says Amado. “Not only was her pitch spot on and her voice gorgeous, but her rhythmic time is so good that we could easily use top session players after her 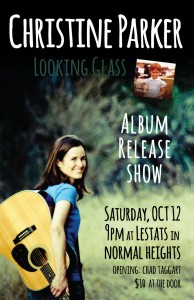 basic tracks were laid down and have the grooves feel tight and organic as if they all had played together. As soon as I heard her first song, I jumped at the chance to work with her,” she adds.