Artist and songwriter Christine Parker was surprised to see a sudden burst of Facebook friend requests and new fans on her Youtube Channel last month — all from Asia. Never having toured there, the greetings and posts (all in Chinese characters) were a bit of a mystery to the Fallbrook native, who now resides in Carlsbad, CA. When they mentioned the title of the song they had heard and loved, “Magic With You,” performed by Parker and co-written by Parker and Arranger/Producer Marti Amado, she began to put two and two together. 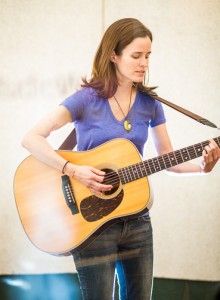 Singer-Songwriter Christine Parker runs through ‘Magic With You’ before tracking with the band.

“That song had only been release a few months before, exclusively by Universal Music’s Production Music division, so I knew that if people had heard it, it must have been used in a TV show or an ad,” says Parker.  One of her new Asian fans sent her a link to the video of a Mitsubishi Outlander commercial (currently running in Taiwan) that featured Parker’s song and performance of “Magic With You,” and the artist was shocked to see that the Youtube video of the ad had almost a million hits after just a few weeks of being posted!  “Totally crazy!” says Parker.

Subsequently she’s received fan requests for both the lyrics and the chord changes for guitar, and has been asked by fans to please consider touring in Asia. The song has now been made available to the public to download from iTunes, courtesy of the publisher. The Mitsubishi Commercial has also led to an on air telephone interview for Parker with DJ Terry Engle at ICRT Radio in Taiwan, scheduled for February.

“It’s a sweet tune,” says Amado who co-wrote, arranged and produced “Magic With You” for the Quirky Pop disc (October 2013) for LA based Killer Tracks. “And Christine has a such a great voice —  fresh and clear and totally sincere.”

“Magic With You” was tracked by Marti Amado and Kellogg Boynton IV at Studio West, and mixed by Ben Moore. Musicians include: bass by Rob Thorsen, Vocals and Guitars by Christine Parker and Glockenspiel by Marti Amado.